Following a manufacturer’s recall of sheaves, Allrig was requested by a customer to remove all defective OEM sheaves from the crown block of the customer’s 8th generation derrick located in Offshore Mauritania. Barry Newman, Regional Sales Manager at Allrig, clarifies: “This particular derrick and crown block is one of the largest derrick packages out there. The crown block alone weighs 15 tons.”

The manufacturer of the diverters suggested that the ultra-deepwater drillship move quayside for the sheave replacement so that cranes could be used to remove the crown block. This option would cost the customer millions of dollars and a significant amount of downtime. Instead, Allrig devised a more effective and time- and cost-efficient method to replace the diverters.

Faced with the challenge of repairing the cluster of defective sheaves at the top of one of the largest and heaviest crown blocks in the world on an offshore drillship—without moving quayside—Allrig had to come up with a more practical and effective solution for the customer.

Allrig’s solution was to use its long-held expertise in rope access to remove the crown block using a drawworks winch. Barry explains: “Allrig’s added value is that we were able to take on the task, plan, adapt and execute the complete removal of an OEM package at a far more competitive price than an OEM. We saved the customer millions by finding an alternative solution so they wouldn’t have to undertake the massive effort of moving the ultra-deepwater drillship quayside.” In the end, Allrig was able to remove and replace the diverters with only 28 days of downtime, a significant reduction in time versus the alternative suggested by the manufacturer. 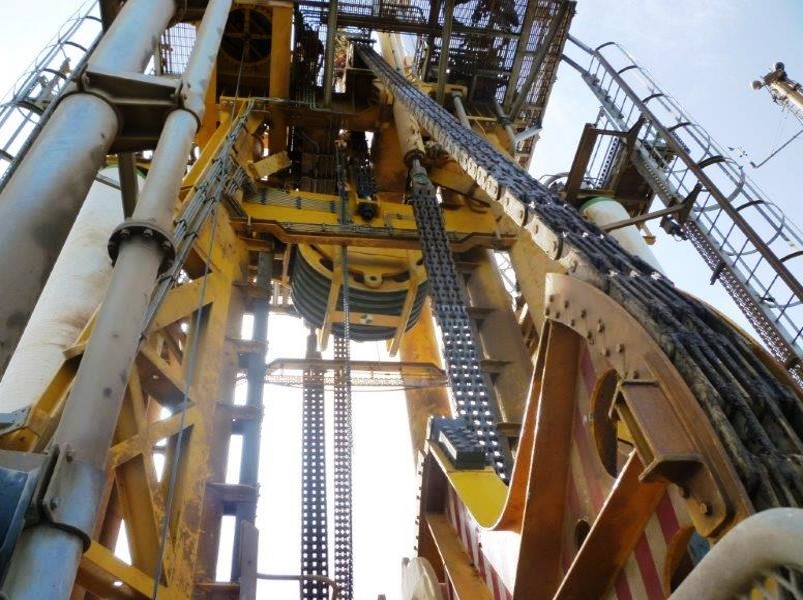 Allrig devised a plan to remove the crown block and replace the defective OEM sheaves, but also discovered some other things along the way, such as beams that didn’t move as expected. Allrig adjusted the planning and the full spectrum of tasks carried out included the:

Below you will find more technical details about the project, a step-by-step explanation by Allrig’s Project Manager Thomas Wilborn.

After that, the AHC was lowered using the crown cluster and then transferred to a 5t winch down to the drill floor for the installation of a new AHC.

The next step was to remove the equalizing chains from the crown cluster and to secure them out of the way. Then, the crown block was stripped—this involved the removal of the two end plates and guide roller assemblies. Thomas clarifies that, “this was done so that we could avoid removing the CMC guide rails and also help reduce the weight of the cluster.”

Replacement of all sheaves

The next step of the project was to install a temporary working line on the drawworks, so the 15t crown block could be lifted. The crown block was both lifted and rotated, as it needed to pass through the watertable. It was then lowered to the floor so all of the sheaves could be replaced. With the main block on the floor, the team removed the outside fast line diverter and lowered it to the floor.

With all the diverters and main block on the floor, all sheaves were replaced with new sheaves provided by OEM. As per the customer’s request, we also carried out a full 5-year NDT and visual inspection of the crown sheave supports and crown block.

Installing equipment back in the crown

Once all the work on the floor was completed, the process of installing all the equipment back in the crown could start. The main block was installed first, followed by the AHC and all the diverters. New bolts were installed in all the items that were removed and disassembled, and tightened to the correct torque. The complete system was hooked backed up and function tested.

Removal and replacement of the AHC

With the main well portion completed, the team then moved to the auxiliary side to remove and replace the AHC. According to Thomas, “this AHC was a bit more difficult due to design differences in the structure and the Compensator system. There was less room to work and more items to work around when transferring the load to ensure it safely reached the floor.” Once on the floor, all piping was installed on the new AHC, raised to the crown and installed.

All systems were checked for leaks and all items that had been taken into the derrick were logged. “We made sure that all items that had gone up to complete the tasks had also come down so that there would be no dropped objects. The customer was very satisfied with Allrig’s performance on the whole job, from our adherence to safety standards to our delivery within a tight time scale and budget,” adds Thomas.

Are you looking for a smart partner? Would you like to know more about this project, or do you have any other questions? Please contact the nearest Allrig location or send an email to bnewman@allriggroup.com and find out what we can do for you.